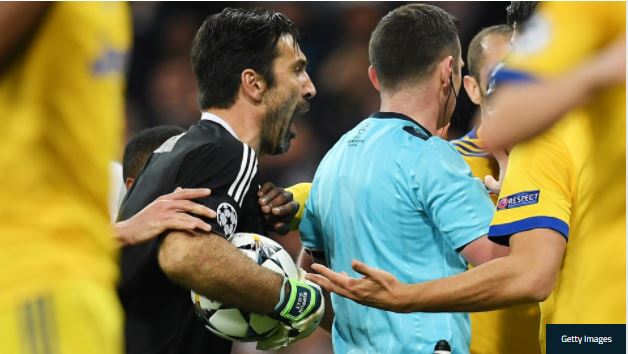 Gianluigi Buffon
Retired Fifa referee Moses Adebanjo claims Gianluigi Buffon deserved to be sent packing in Wednesday’s Champions League clash between Real Madrid and Juventus.
The cracker at the Santiago Bernabeu was poised for extra-time before Medhi Benatia fouled Lucaz Vazquez with referee Michael Oliver awarding a penalty for Zinedine Zidane’s men.
This sparked a frantic protest from the Italian football icon, who was shown a red card having confronted referee Oliver.
Reactions have continued to trail the harsh dismissal of the 40-year-old, the chairman of Lagos State Referees Council feels the English arbiter’s was on point because Gigi ‘went beyond his bound’.
“I thank him for his courage. To be honest with you, it will be difficult for a lot of people to take such decision at that period of time being human. He took the right decision sincerely speaking,” he told Goal.
“As a captain, you are responsible for your team and not to the referee. Captainship does not give you any extra right to influence the referee’s decision.
“Buffon went beyond his bound. The referee took a decision and he was going to him. Was he going to change his decision? The law does not permit that.
“However, in some situations, maybe some referees would have managed that situation differently. That would then be based on individual leverage. But for Oliver to follow the rule of the game, he was entirely right.”
--Advertisements--