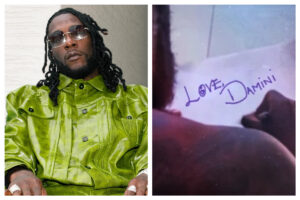 The African Giant on Friday, July 8, 2022 served the music community with his much anticipated studio album labeled; ‘Love, Damini’. The nineteen tracked project since its release has become the topic on social media.

Following the successful release of the body of work, media streaming and download service, Boomplay has announced that, ‘Love, Damini’ album has amassed over 20 million streams on their platform.