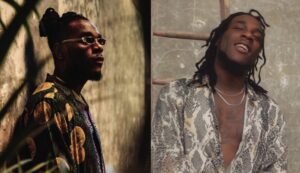 Nigerian superstar singer, Damini Ogulu aka Burna Boy has been captured on tape doing a self promotion of his latest album, Love, Damini.

The Afrobeats and Dancehall star who granted an interview in Barbados decided to interact with fans and other people he met at a store.

He had earlier performed at the Tipsy All White party on Sunday as part of his Love, Damini Summer Tour.

Burna Boy asked a fan who was recording him if he has listened to the album, but he gave a negative response. This prompted the African Giant to get up and demand that he downloads the album from iTunes.

In a video circulating online, he could be seen walking round the store and asking people if they have downloaded, Love Damini on their devices.