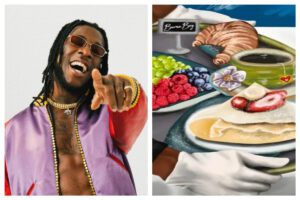 The masterpiece, ‘Last Last’ which was first released on Friday, May 13, 2022 happens to be a single off Burna Boy’s recently released nineteen tracked star-studded studio album captioned, ‘Love, Damini’.

Well, the African Giant on Wednesday, July 13, 2022 took his social media page to announce the remix to the chart topping tune, ‘Last Last’. In a post via the bird app, the top Afrobeats act revealed the upcoming remix features, Dave. 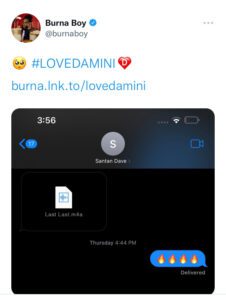 Dave is a highly rated British recording artiste, songwriter and producer with a unoque approach to making music. Dave has gained acclaim for his socially conscious lyricism and wordplay, and is among the most recognized British rappers.

This announcement is definitely an unexpected surprise for music lovers as Burna Boy expressed how he felt emotionally on although this is not the first time these top acts would be working together on a project.

In a report by Music Chart Publication, ‘Turntable Charts’, Burna Boy is the only artiste to have 7 songs in the number one position on the TV charts of the country. The songs are; ‘Second Sermon (Remix)’, ‘B. D’OR’, ‘Question’, ‘Kilometre’, ‘Onyeka (Baby)’, ‘Ginger’ and ‘Last Last’.