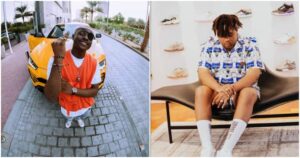 Ruger, the Nigerian singer, has boasted that Daniel Benson, his colleague better know as BNXN, is not better than him.

The superiority debate between the pair started on Thursday when Ruger held an interactive Twitter session with his fans.

During the session, the ‘Bounce’ crooner told his fans to ask him anything and promised to provide the answer.

A Twitter user asked if D Prince, the singer and music executive, has ever told him that BNXN is a better artiste that him.

“Has D’Prince told you bnxn is your grand dad musically?#AskRuger,” he asked.

The Twitter user’s question came after Ruger earlier boasted of his relationship with D’Prince and how the record label boss often commend his works.

“I’m so happy anytime I [email protected] DPRINCEMAVIN new music and he calls me immediately to tell me “Ruger this is a jam” he’s got the best ears in this industry no one can ever deny that,” Ruger had tweeted.

Reacting, the singer slammed the user and called him a “fool”. He also accompanied his response with a screenshot of his chat, believed to be with D’Prince.

Joining the debate, another Twitter user insisted that BNXN is better than Ruger, adding that “there’s nothing he can do about that.”

“Lol BNXN is better than you and there’s nothing you can do about it you this low budget Samuel L Jackson,” the user wrote.

But Ruger fired back at the user. The ‘Dior’ singer said while he loves BNXN, he is not better than him.

“I love Buju he’s good but he’s not better than me. Everything I’ve done since the beginning was only Ruger. All my hits are just Ruger. I’m always proud going on stage around the world with my own hits and everyone is singing along. You see the difference?” he replied.

Ruger and BNXN have continued to pull the weight of fame in the Nigerian music industry since they came into the limelight. 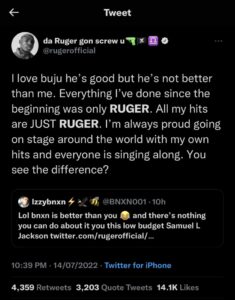