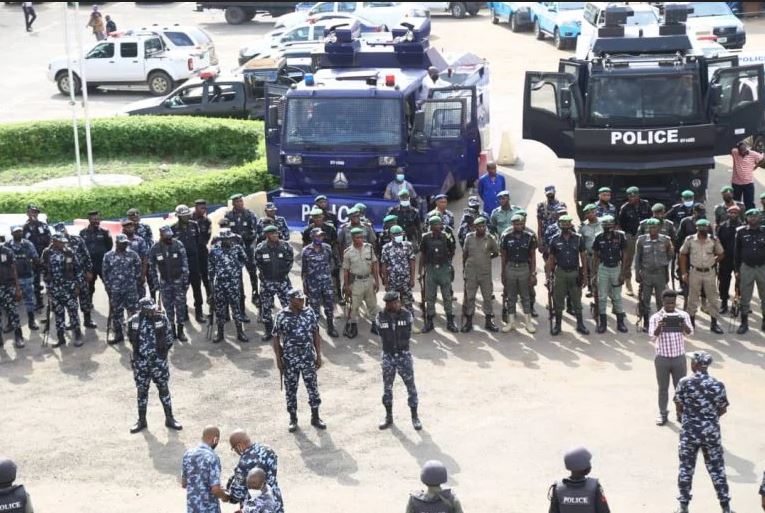 According to a rpeort by The PUNCH, there is a heavy presence of security operatives at the Gani Fawehinmi Park in Ojota, Lagos, the proposed venue of the Yoruba nation rally by separatist agitators.

No Yoruba nation agitator has been seen at the venue as of 09:19am when our correspondent filed this report while vehicular movement and business activities continue uninterrupted along the axis.

The Lagos State Police Commissioner, Hakeem Odumosu, was also seen with his men at the venue. Odumosu’s men had on Friday embarked on a show of force in the state to warn agitators and Yoruba nation separatists against any form of rally slated to hold in the nation’s economic capital today.

Following Thursday raid of the house of Yoruba rights activist Sunday Adeyemo also known as Sunday Igboho by the Department of State Services, the activist, who has been declared wanted by the secret police for allegedly stockpiling arms, had suspended the Lagos rally.

But the umbrella body of Yoruba Self-Determination Groups, Ilana Omo Oodua, led by Second Republic Senator, Banji Akintoye, had said there was no going back, adding that “It is the duty of Police to ensure the rally is not hijacked by hoodlums”.

“Our rally scheduled to hold on Saturday will still hold without any fear or intimidation and we promise to be peaceful like we have always been,” the Akintoye-led body wrote in a letter to the Commissioner of Police in the state, Hakeem Odumosu; and Governor Babajide Sanwo-Olu.

Akintoye, Igboho and their apostles have been going across the South-West geopolitical zone to crusade their secessionist campaign, citing injustice meted out to the people of the region as well as worsening insecurity as reasons for their agitation but the Federal Government has insisted on the unity and indissolubility of Nigeria.

But Odumosu had sent a warning signal to the organisers of the said mega rally to desist from the protest.