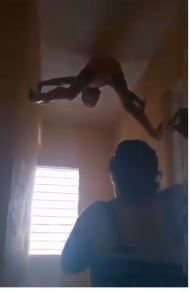 A video has captured the moment a boy took a Marvel character, Spiderman to another level to avoid being disciplined by his mother.

In the clip, the boy could be seen hanging on the wall while his mother held a slipper and spanked him at the slightest opportunity she had.

The video which has wowed many left social media users asking how he got there and maintained his grip on a smooth surface with no aiding equipment.

The boy who was keen on evading his mother’s wrath by all means surprisingly began to crawl on the wall gradually.