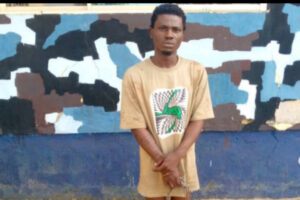 A 23-year-old boy identified as Godspower Adegheji has reportedly been apprehended by the Delat State Police Command for hacking his girlfriend to death in Ozoro area of the state.

The suspect was said to have attacked the deceased, Gifty Oloku with a machete after she broke his iPhone 11 Pro Max during an altercation after the deceased went out without his permission.

In a statement released by the police command, the spokesperson, Bright Edafe revealed the incident happened on Sunday after the suspect confronted the deceased on why she went out without his notice.

He accused the deceased of cheating on him with whoever she went out with, leading to a physical brawl and led to the deceased breaking his iPhone 11 Pro Max mistakenly. He then brought out a machete and hacked her to death.

Further reports indicated that the suspect was on drugs and did not commit the crime in his right frame of mind. He was reported to have not escaped after committing the crime but rushed the deceased to the hospital.

The girl is a student of the Ozoro polytechnic, but the guy is not. Maybe he has graduated. The guy must have been on drugs last night, it was this morning that he regained himself and rushed the girl to the hospital,” a source said.