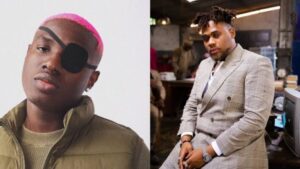 The kitchen has been heated up and is currently smoking hot as BNXN formerly known as Buju has replied to the shots Ruger fired at his artistry. Read our story below for more.

Afro-fusion sensation BNXN formerly known as Buju has responded to Ruger’s shade on his artistry.

While the supremacy scuffle had taken off on Twitter, BNXN had clapped back on the multimedia messaging app, Snapchat with a three-part response where he made a detailed reply to Ruger’s claim of being a better artiste.

According to BNXN who claimed to have been fond of Ruger, his artistry exists on a different scale as he doesn’t have to share his royalties and has worked with legends while being an independent artiste. He also fired shots at Ruger’s claim of having better numbers, stating that his debut project Sorry I’m Late ranks higher than his two EPs; The Second Wave and the deluxe.

BNXN said; “Sorry I’m Late still above two of your projects and the Apple Music charts, you had to drop a deluxe for one and you think you got shit on me? JONZING WORLD indeed. You’re owing your boss money and you’re ta[l]king to a boss? Bad Since ’97 is coming, I got something for you.”