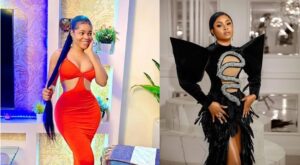 The BBNaija contestants who were ushered into the house over the weekend got into their firs clash over a misunderstanding during a talent show.

Chichi, who revealed that she is a stripper had suggested that they have a dance show off but Bella opposed her idea.

The housemates had already started a performance when Chichi said they should change it to dance but Bella said there will be no changes.

Both of them then got into an argument as other housemates watched in silence.