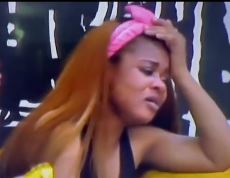 BBNaija Level Up housemate, Phyna broke down in tears after being nominated on Monday for possible eviction.

The reality star and other four housemates – Khalid, Bryan, Groovy, Ilebaye – were put up for possible eviction by the week three’s Head of House, Adekunle.

After being nominated once again for eviction,  Phyna, who had escaped last week’s eviction, broke down in bitter tears while her friend, Amaka tried to console and encourage her.

In viral videos capturing the emotional moment, the reality star could be seen weeping copious amounts of tears while other housemates tried, unsuccessfully, to console her.

Alpha Phyna is as real as it gets. She has shown us everything including her vulnerable side, she puts the Reality in Reality TV. It's now time to vote, we need to keep quality content in the house. Phyna isn't safe until you vote. Link is in my bio, VOTE!! #bbnaija pic.twitter.com/uNFRcB7bTD