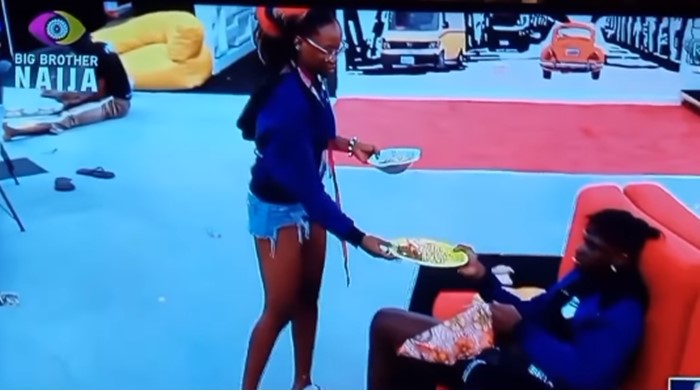 Big Brother Naija housemate, Ilebaye served food to Bryann on Tuesday afternoon after settling their differences and it left him surprised.

The duo had fought twice within a space of two days despite being friends and it was as a centred on relationship matters.

However, they sorted out their issues when Bryann apologised for mentioning her father during their quarrel.

Just hours after reconciling, Ilebaye gave him a plate of food while in the lounge, but he gave her a confused look because he probably was not expecting her to be nice to him after their fight.

He, however, showed appreciation and she went ahead to ask if he wanted more pepper in the meal.

It may be recalled that Bryann and Ilebaye clased on Sunday when she spotted the recently introduced housemate, Modella using her edge control on his hair.

She got triggered because she had given her edge control to Modella to make her hair as well as hers, however, Modella didn’t return it.

Spotting Modella using her edge control on Bryan’s hair, Ilebaye lost her temper and lashed out at them.

Also, on Monday, Ilebaye fought Bryann again and it was because of rumours that they are in a relationship.

She accused him of spreading false information in the house that they having an intimate relationship. Bryann defended himself and shouted at her but the matter escalated to a point that he mentioned her dad.