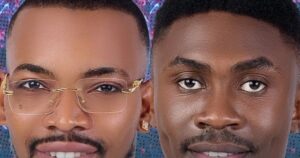 Kess and Pharmsavi have been evicted from the seventh edition of the Big Brother Nigeria (BBNaija) reality TV show.

The reality stars were sent packing from the house during the live eviction show on Sunday after getting the lowest votes for the week.

The week’s eviction began with Big Brother pulling a major one on the level one housemates by instructing them to pack their bags and await instructions in the arena. The housemates have been on holiday mode for weeks owing to their winning streak. With the least vote for the week was Kess making him the fifth housemate to be evicted from the show. Pharmsavi followed closely as the sixth housemate. Both housemates were nominated by week four’s HoH Eloswag alongside Daniella, Amaka, Groovy and fake housemates Modella and Chizzy.