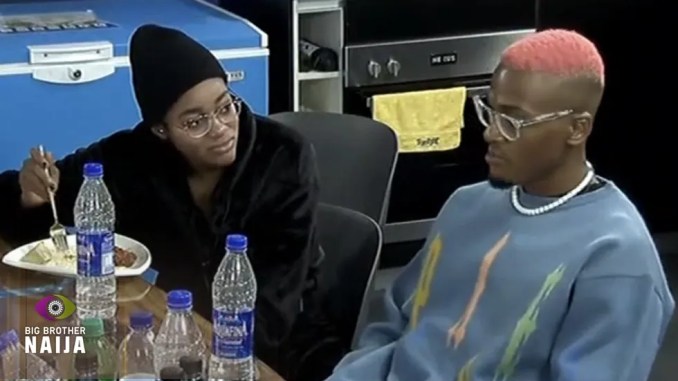 Big Brother Naija season 7 housemate, Groovy, has said that he and disqualified housemate, Beauty stopped being an item in the house after their fight.

It may be recalled that Beauty got disqualified two weeks ago after getting two strikes following her altercation with Groovy, who was her love-interest.

Speaking with Doyin after moving to the Level 1 house, he explained that he made a decision to end his relationship with Beauty on the day they had the argument.

He made the comment in an effort to defend his decision to begin something intimate with Phyna after Beauty left the show.

Groovy said; “I told myself that Sunday that I was done, we could however be friends in the house” -Groovy on his relationship with Beauty after their Saturday/Sunday fight.”

Doyin said to him; “I don’t think it is a bad thing, she is no longer here and it is not like you people were Married…

Meanwhile, on Saturday, Phyna has spoken on her relationship with fellow housemate, Groovy and plans to take it beyond the show.

While having a conversation with Chizzy, and Amaka about the chances of Groovy dumping her inside or outside the house, Phyna expressed confidence that he is now hers.

She said that he would not move to any other lady in the house because she is his last bus stop.

Speaking on how their relationship would play out when they leave the house, the hype priestess said that if Groovy decides that he wants to break up, then she would be fine with it.

But she added that if he dares to deny their relationship during the Level Up reunion next year, by suggesting that what they had was not defined then, she would break a high heel shoe on his head.

In her words; ”Groovy don reach me, and na him bus stop be that…but if we go outside here and he choose to go, no wahala. But if we get to reunion and he by mistake says “Phyna was it defined”…if I no break high shoe for your head change my name”.