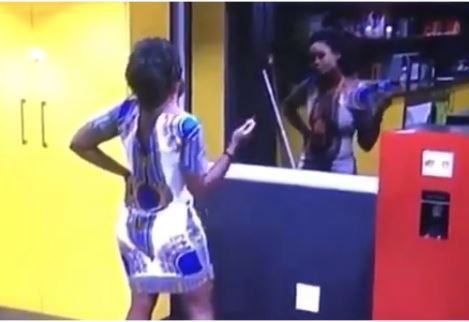 Cee-C in front of the mirror
Cee-C has proven to be quite unpredictable with her new action in the Big Brother Naija house as the show nears its end.
The young lady, who is widely acknowledged to be the most controversial housemate, was spotted in front of a mirror telling herself what her problem is and then cautioning herself to get rid of it.
In a Video which is now making waves on the internet, Cee-C was spotted telling herself in front of the mirror that she has to deal with her anger issues and bitterness
Some fans are praising Cee-C for apparently realizing that she has that problem as they say she is one step closer to solving it, however others feel she is acting for the camera.
Watch the Video below:

CeeC calls an emergency meeting with herself after pinpointing her problem