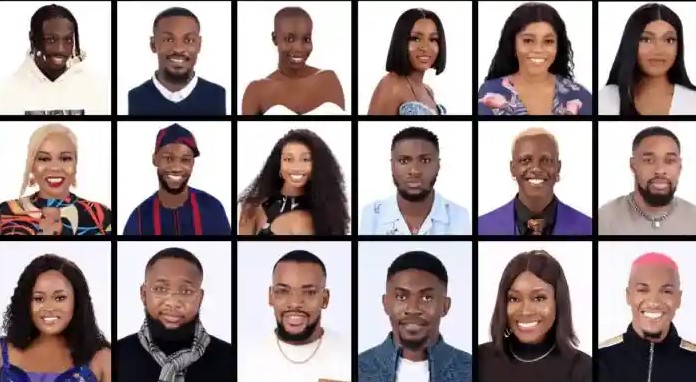 All Big Brother Naija season 7 housemates have been nominated for possible eviction next Sunday.

Biggie announced the decision on Monday evening after the Head of House challenge and nomination session.

The housemates were initially asked to nominate fellow housemates but Big Brother canceled the nominations due to their non chalance.

He explained that their delay in answering his call to gather at the lounge is the reason he put all of them up except the HOH, Chomzy and her deputy, Eloswag.

ONPOINTY reported earlier that Chomzy has become the Head of House for week 5 in the Big Brother Naija Level Up season.

This makes her the first female HOH for the season as the position has been held by 4 men before her.

Chomzy emerged the winner on Monday after successfully completing the HOH task ahead of other housemates.

Biggie announced that the Head of House room has been opened and he asked her to choose a deputy HOH to share the suite.

She picked the immediate past Head of House, Eloswag and he accepted. Both housemates have earned immunity from nominations for the week.

The task on Monday, August 22 saw all Season 7 housemates fight for a chance to continue in the reality show except incumbent HOH.

Housemates were instructed to use their mouths and pick donkua balls from one plate to another.

Biggie allowed the female housemates to go first and after the challenge Bella and Chomzy made it to the finals.

The male housemates went next but they were all disqualified by Big Brother because they picked more than one donkua ball at a time.

In the finals, Chomzy and Bella were provided candles and pickers to recreate it the way the one in front of them was placed within five minutes.

Bella finished first and indicated that she was done but after being inspected by Eloswag, it was discovered she made a mistake and so Chomzy was declared the winner, hence becoming the only female head of house so far.