The controversial voting result
The controversy trailing this year’s Big Brother Naija 2018 has reached a new level as organizers of the reality were forced to apologize for airing a wrong percentage vote for housemate, Nina during the live eviction show.
Recall that Nigerians had taken to social media to blast the organizers after noticing an error in the voting results accusing them of altering the eviction votes.
A check on the votes showed that 1. 44 % was missing.
Nina emerged highest with 44.00% votes; Cee-C followed with 24.38%, while Teddy A and Bam Bam got 16.81% and 13.37% respectively.
Reacting to the error, the organizers on their official Twitter handle wrote, ”Dear viewers,
”An incorrect percentage was published for Nina during tonight’s Eviction show.
”While we deeply regret this error, we wish to state that the audited and verified percentage for Nina is 45.44% as opposed to 44%.

”We thank you for your usual support & understanding.”
The apology below: 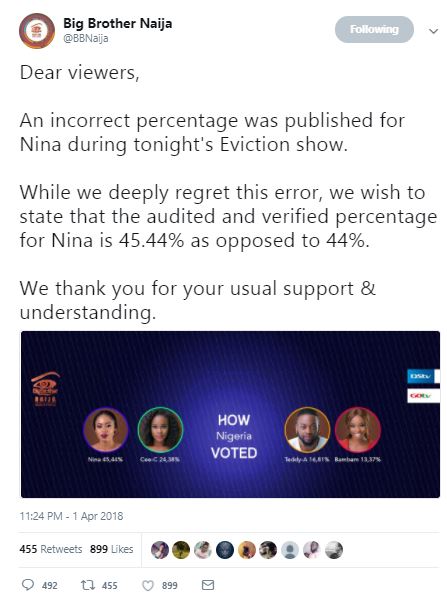