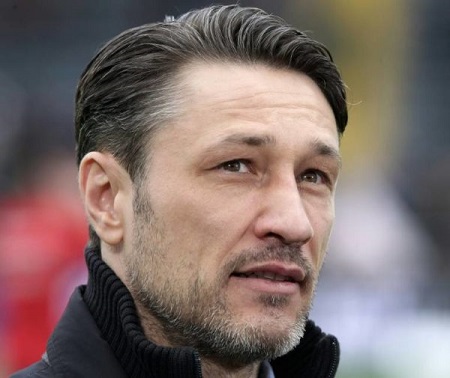 Bayern hire Niko Kovac from Eintracht Frankfurt
Eintracht Frankfurt coach Niko Kovac has been announced by Bayern Munich as their new manager and successor  to Jupp Heynckes from 1 July.
“Niko was a player at Bayern, he is very familiar with the people involved as well as the structure and the DNA of the club,” said Bayern sporting director Hasan Salihamidzic.
“We are convinced that he is the right coach for the future of Bayern.”
The 46-year-old Croatian will start a three-year contract from July 1, the club announced just minutes before Friday’s Champions League semi-finals draw which left the Bundesliga champions pitted against holders Real Madrid.
A close friend of Salihamidzic, Kovac will also bring his 44-year-old brother Robert Kovac from Frankfurt as assistant coach.
Born in Berlin to Croatian parents, both brothers played for the Croatian national team as well as Bayern.
The elder Kovac was also coach of the Croatian team with his brother as assistant manager.
Bayern did not reveal the cost of poaching Kovac, but both Bild and Sport Bild claimed that his departure before the end of his Frankfurt contract in 2019 would cost Bayern 2.2 million euros ($2.7 million).
Both Frankfurt and Bayern last week denied that Kovac was on his way to Munich.
Kovac himself also said that “there is no reason to doubt that I will be the coach of Frankfurt next season”.
-NAN
--Advertisements--