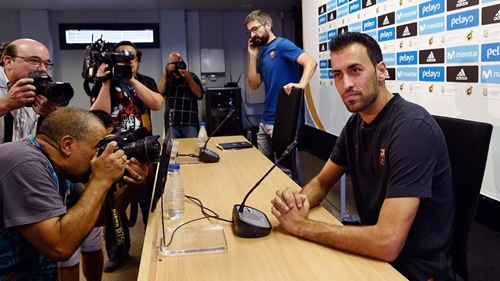 Sergio Busquets
Sergio Busquets believes Barcelona will need to pay “special attention” to Willian when Chelsea come to town for their crunch Champions League clash this night, according to Standard UK.
Willian scored in the last-16 first leg at Stamford Bridge three weeks ago before Lionel Messi scored a valuable away goal for the visitors.
Since then, Willian has netted against Manchester United and Crystal Palace to earn praise from manager, Antonio Conte, who labelled the Brazilian as “fantastic” following Saturday’s 2-1 victory over the Eagles.
Speaking ahead of the Champions league clash, Busquets warned his Barcelona team-mates to be wary of Willian but stressed the threat of other players too such as Eden Hazard.
“We have to pay special attention to him,” Busquets told reporters, “but [also Alvaro] Morata, Pedro or Hazard. They have specific attack profiles. They are a good team.”
Barcelona go into their second leg tie against Chelsea with the advantage following their away goal at Stamford Bridge.
With Chelsea needing to score to advance to the quarter-finals of the Champions League, Busquets admitted that even a goalless draw will suit the hosts today. He said: “It is going to be a hard match, this is the Champions League. We are playing against a very good team with a defensive play.
“We will try to get the ball, they are well prepared and it will be hard. We will try to play hard to get the win, but 0-0 could be a good result. If they score we could be really suffering for that.”
Ten-man Chelsea knocked out Barcelona on their way to winning the Champions League in 2012 after they came from two goals down in their semi-final second-leg tie at the Camp Nou and secured a 2-2 draw that sent them into the final.
Busquets, who scored in that game, admitted it was a “sad” match for Barcelona but insisted the players have learned from it.
He added: “It is obvious that we can learn, this was a long time ago. We have played a lot since.“We started well that match but then they scored in the first half. We tried hard.
"Football is like this, sometimes you can just not score.“Then there was the draw and it was a sad match because we couldn’t go into the final. Sometimes football can be like this.”
--Advertisements--