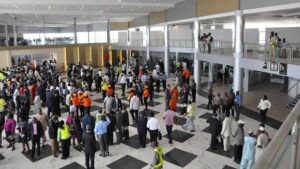 This is following the closures of Runway 18L, hike in aviation fuel also known as Jet A1, and suspension of aero contractors and Dana airlines.

The Airlines Operators of Nigeria, AON has also called on the Federal Aviation Authority of Nigeria, FAAN, to intervene in the situation, saying the development is frustrating.

This development is coming as the price of Jet A1 nears N900 per litre in the market, a rise of 346 percent, when compared to N200 per litre sold in February 2022.

For instance, a survey by Aviation World showed that Jet A1 in Lagos sells for N822 per litre while in Abuja the product sells for N859.

In Port Harcourt, Jet fuel sells for N852 per litre while it sells for N890 and N892 in Yola and Maiduguri respectively.

A breakdown of how the situation leads to delays and cancellation of flight showed that Jet fuel accounts for about 40 per cent of total operational expenses made by airline operators and the closure of the main domestic runway of Murtala Mohammad Airport, MMA, automatically adds an additional 15 per cent fuel costs per trip in and out of MMA.

However, the President of Aviation Safety Round Table Initiative, ASRTI, Dr Gabriel Olowo in a chat with Aviation World, advised airlines to sell tickets at the rate that is commensurate with the amoun they buy Jet A1, stressing that a price increase is better than negotiating safety by cutting corners.

He said: “This is my advice to Airlines; given these uncontrollable factors of production in the airline industry, demand will definitely drop but it is better to increase price than cutting corners and planning an accident.

“If a trip fuel is 4000litres for one hour on Jet (LOS-ABV) for example, at N800 per litre which is N3.2million and a load factor of 100 passengers, this means fuel cost per passenger is N32.000 which is approximately 30% of the total cost. This will translate into N107.000 tariff for a one-way journey.

“PHCN has introduced premium tariff on power and those who can afford it are settling for it. This is not the time for frivolous and reckless competition or uneconomic patriotism. Operators should intensify cooperation, collaboration, consolidation, and prune schedules to minimize perishable seats and maximize load factor.

“The spirit of Spring Alliance must be strengthened.The sector must not negotiate an accident. Nigerian Civil Aviation Authority, NCAA, is encouraged to be more vigilant to watch cutting corners.”

Speaking on the issue, an aviation analyst, Mr. Olumide Ohunayo, said it would impact the sector negatively and also give rise to a surge in passenger traffic.

He said: “It is a trying time for the industry. Aero has suspended its operations, and Dana Air has been grounded by NCAA on an economic basis. Although the two situations are not the same, one was voluntary, the other was involuntary.

“The common factor here is that they are both grounded at a time when airlines are battling for facilities, forex and crippling fuel price which has continued to rise uncontrollably.

“With this, we are also having a situation where the government is not able to remit funds meant for foreign airlines, which also put stress on naira ticketing on international routes.

“Domestic airlines, passengers and the industry, in general, need to address the forex crisis to restore investor’s confidence and get more investors for the industry. We also need to see how we can mitigate the continuous rise of Jet A1 price.”

As a way forward in addressing the constraints in the sector, Ohunayo noted that government needs to assist the sector to address the tax and charges associated with aviation fuel. He pointed out that government can reduce the cost a little not significantly.

According to him: “It is not a time to kick start another investment, rather it is a time to look out for a way to sustain the sector. We need to bring down the fuel price and also increase the operating hours of the airports to help the airlines.

“For the passenger, I believe there will be that initial shock, a little withdrawal but with the insecurity on the roads, they will have no choice. The fears will increase, and there will be more demands because already two airlines are out of the market and there is no replacement yet.

“Maybe along the line when these airlines return there will be more stabilization. This development would assist some airlines to recoup their losses, as there’s already a huge loss in the sector. Weekly, there might be some level of profit, but in financial books, it is the end of the year that companies look at.”