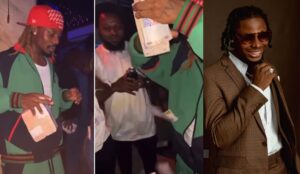 Budding Nigerian artiste, Asake has visited a strip club to celebrate with his YBNL family following months of back to back hits.

The ‘Sungba’ crooner went along with bundles of Naira and partied hard as his song was being played on the sound system.

In a video from the fun night at the club, Asake could be seen holding a stack of cash while the other wads were being held by a member of his entourage.

At a point, he started spraying the money with reckless abandon, and by the time he was done the club was littered with naira notes.