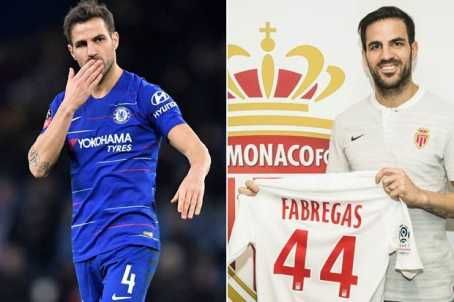 AS Monaco have announced the signing of midfielder Cesc Fabregas from Chelsea.

The 31-year-old has signed a three-year contract with the French club until 2021.

Fabregas told Monaco’s official website: “It is a great pleasure to join AS Monaco, a new project for me.

“The group is of quality with young players and a young coach.

“I’m here to help the team, I’m looking forward to starting, we have a great match to play in Marseille on Sunday. I am very excited.”

In a Farewell statement, Chelsea wrote: “We thank Cesc for his wonderful service and wish him the very best of luck for the next chapter in what has been a fantastic career.

“There is no doubt Fabregas’s place in the Chelsea history books is assured given his achievements over the past four-and-a-half seasons.

“Big goals and outstanding moments of quality, all backed up by the ultimate aim, which is to be part of a successful, trophy-winning team.

“Fabregas, who scored 22 goals for the club in total, departs having helped the club achieve great success, as well as providing our supporters with some wonderful memories.

“He leaves with the very best wishes of everybody at Chelsea Football Club. Gracias, Cesc!”