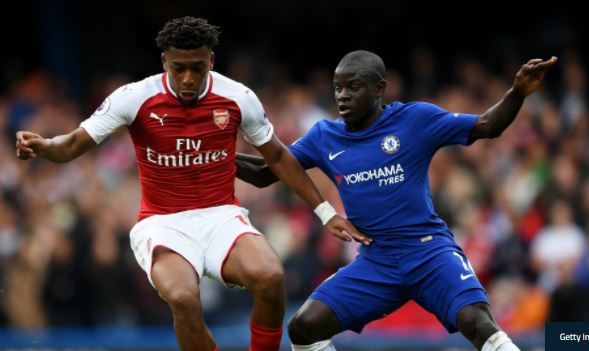 Alex Iwobi (Left)
Ian Wright has insisted that Arsene Wenger ‘should have had a stronger stance’ on Alex Iwobi by leaving him out of Wednesday’s English League Cup semi-final clash against Chelsea.
The Super Eagles forward was reported to have been partying the night before Arsenal’s shocking FA Cup loss to Nottingham Forest on Sunday, where he gave an underwhelming performance.
He was again on parade for the full 90 minutes as the Emirates Stadium outfit held Antonio Conte’s men to a 0-0 stalement at the Stamford Bridge.
And Wright has expressed his displeasure with the way the Gunners boss handled the 21-year-old’s situation.
“For a youngster to do that says to me that there is something wrong in the dressing room," Wright told SkySports.
"You can’t have a youngster feeling like he can do that and still play. Arsene Wenger should have had a stronger stance on this one.
"People laugh at Arsenal and see them as a bit of a joke at the moment. Players don’t want to be there, and it feels like everything is losing control at Arsenal.”
Meanwhile, Wenger has backed his decision to play the 21-year-old, saying: "It’s one thing to punish somebody individually and a second thing to punish everybody.
"If I think he can help the team to win it’s nothing to do with the fact he can be punished separately and individually."
After playing 0-0 draw on Wednesday, Chelsea will visit Arsenal for the second leg of the semi-final fixture on January 24 as they both battle for a place in the final of the English League Cup.
--Advertisements--