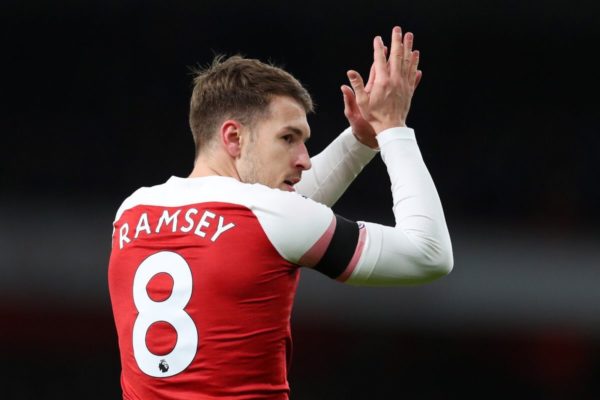 Aaron Ramsey
Aaron Ramsey has agreed a five-year deal with Juventus worth £36m and will join the Italian champions on a free transfer at the end of the season.
According to The Guardian, the midfielder who has been discussing a move for weeks, will leave Arsenal after 10 years at the club.
It had been clear the Wales international would move in the summer and Juventus had been the frontrunners to secure the 28-year-old’s signature.
Ramsey will be paid around £140,000 a week (£7.2m a season), making him Juventus’s second-highest earner behind Cristiano Ronaldo but ahead Paulo Dybala and Douglas Costa.
Juventus, who have won the past seven Serie A titles, signed Ronaldo for €100m last summer and are nine points clear of Napoli in second place after 19 games.
They have reached two of the last four Champions League finals, albeit losing both, to Barcelona in 2015 and Real Madrid two years later. They are in the last 16 of this season’s competition, where they face Atlético Madrid.
The Juventus manager, Max Allegri, and the director Fabio Paratici are huge admirers of Ramsey, who is likely to be given a place in the Juventus starting XI, most likely playing with Miralem Pjanic and Blaise Matuidi in a three-man midfield. He is likely to replace one of Emre Can, Rodrigo Bentancur and Sami Khedira, with the latter possibly leaving the club in the summer.
Ramsey signed for Arsenal from Cardiff for £4.8m. He has played 252 top-flight games for the club, scoring 52 goals. He won three FA Cups, scoring the winning goal in the 2014 and 2017 finals.
He played arguably the best football of his career during Euro 2016 when Wales reached the semi-finals, although he was suspended for the last-four game when Portugal beat Chris Coleman’s team 2-0.
Ramsey has had his injury problems but Juventus are delighted to have secured him on a free transfer, while Arsenal will regret seeing a player in the prime of his career leave under these circumstances.