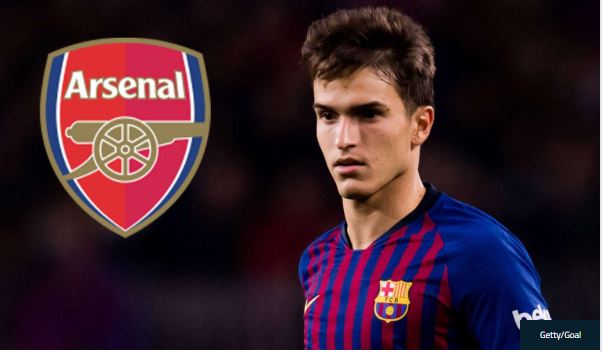 Denis Suarez
Arsenal are expected to finalise the loan signing of Denis Suarez from Barcelona before Thursday’s transfer deadline after a breakthrough in talks with the Catalan club, Goal understands.
Unai Emery confirmed at the start of January that the Gunners will not be making any permanent signings during the winter transfer window, but admitted that loan deals are possible.
The north Londoners brought in Lucas Torreira, Bernd Leno, Sokratis Papastathopoulos and Matteo Guendouzi during the summer transfer window, and are expecting an increased transfer budget this summer when their new £300 million kit deal with Adidas kicks in.
Suarez, though, has been identified as a player who can compete with Alex Iwobi and Henrikh Mkhitaryan for a place on the flanks during the second half of the season, having previously worked under Emery when the two were at Sevilla in the 2014-15 season.
Talks were initially at an advanced stage between the two clubs but broke down after Barcelona insisted on an obligation to buy clause being inserted in the loan agreement.
However, as many expected, the deal is now close to being finalised towards the end of the transfer window with Suarez keen on joining Arsenal following a phone conversation with Emery.
Raul Sanllehi, Arsenal’s head of football, has been leading negotiations for the Gunners with Barcelona, where he previously worked for nine years.
Suarez’s contract expires in the summer of 2020, although reports have suggested that he has agreed to a one-year extension in order to finalise a loan spell at Emirates Stadium.
An initial €2.5m will be paid by Emery’s side with a summer purchase option expected to be in the region of €20m (£17m/$23m). Arsenal are still in the market for one more loan signing, with PSG youngster Christopher Nkunku and Inter winger Ivan Perisic both being targeted .
Speaking ahead of Tuesday night’s Premier League game against Cardiff, Emery confirmed that the club were working to bring players in before deadline day .
"It’s one thing the club is working on, the possibility with different players," he told a news conference.
"I don’t know exactly which players, but it’s players with the possibility to help us, who can play on the wing, right or left. I think any player who can come here and help us is good news.
"[Suarez] is the same [as Perisic]. This transfer is not easy and the message is that the club are working on different players. The possibility, if it can be [done], is good for us.
"I don’t know [what will happen] because this transfer window is not easy. I know the club are doing all they can to achieve one player to help us."

Angel Tells Pere How To Deal With Saga After ‘Betraying Him’