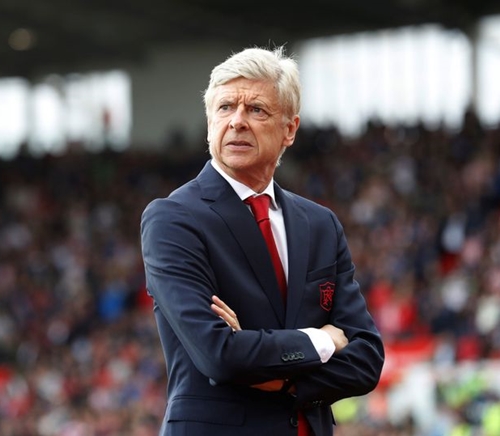 Arsene Wenger
Arsene Wenger admitted he was hurting after Arsenal surrendered their grip on the FA Cup with 4-2 defeat to Nottingham Forest.
The Frenchman lost a third-round tie for the first time as his much-changed side lost in an action-packed clash at the City Ground.
Wenger has become the competition’s most successful manager, winning it seven times since taking charge of Arsenal in 1996, but the country’s longest-serving boss was undone by Forest caretaker manger Gary Brazil on Sunday.
Eric Lichaj scored twice either side of Per Mertesacker’s equaliser before penalties from Ben Brereton and Kieran Dowell sandwiched Danny Welbeck’s goal in a 4-2 win for the Championship side.
Forest finished the match with 10 men as Joe Worrall was shown a straight red card in the final minute for a late challenge on Chuba Akpom, but that did not dampen the home celebrations at the final whistle.
Dejected but magnanimous in defeat, Wenger said: "It hurts very much because we have won the FA Cup three times in the past four years.
"On the other hand it is a very difficult competition to win. But it hurts to go out in the third round – for the first time. But we knew it would be very tricky, it is a difficult place to come.
"I congratulate Nottingham Forest on an outstanding performance. They won decisive challenges and were always dangerous going forward and overall I think they deserved to win."
Wenger’s influence on matters was reduced as he watched from the stands. The 68-year-old served the first of a three-match touchline ban after being hit with a misconduct charge and a £40,000 fine by the Football Association for his recent, and very public, criticism of referees.
Asked if his team missed his input from the technical area, he said: "No, I wouldn’t say that. We were just not good enough, not anywhere. Not in the front, not in the middle, not at the back, and we paid for it.
"They looked sharper and had more chances, it was an outstanding performance from Nottingham Forest."
Wenger made nine changes from the team that started the midweek Premier League draw with Chelsea, with just Rob Holding and Ainsley Maitland-Niles keeping their places in the team.
Arsenal clearly lacked their usual fluency but the Gunners boss refused to use it as an excuse for the defeat.
"We have had a difficult schedule. Many players were on the edge and we play again on Wednesday," he said.
"It was nearly impossible and I can understand that the selection was questioned but as well it would be an easy excuse as we had eight or nine international experienced players on the pitch.
"That would be the wrong excuse, for me. We repeated the same mistakes over and over – once, twice, three times – and that is where we are guilty today. They were better than us, which is disappointing."
--Advertisements--