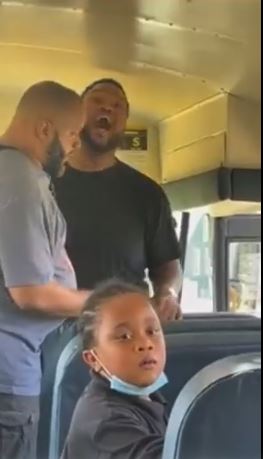 A video has captured the shocking moment an aggrieved man threatened children on a school bus over claims his daughter was hit by one of the students.

According to Wave 3 News, the incident took place on Friday, August, 26 as the students of Carter Elementary School in Louisville, KY, were on the bus on their way home.

In the viral video, a man can be seen yelling at the children on the bus threatening to “flip this whole bus,” if they were to touch his daughter again.

Another man, who appeared to be the driver, was also seen holding the angry father back from the terrified children as some were crying during the confrontation.

The school’s principal, Jamie Wyman sent an email to parents following the incident informing them about what happened. She reassured that the bus driver was directed to take the students back to the school without making any additional stops, and once at the school, the students waited until LMPD (Louisville Metro Police Department) and JCPS (Jefferson County Public School) Security arrived.

A JCPS spokesperson shared that a school safety officer was present during afternoon dismissal on Monday, and an officer followed the bus in the morning. The bus stop where the incident occurred was also monitored by a JCPS security guard.

So far, no arrests have been made in connection to the incident.

It’s a video of a father getting on a school bus threatening a little girl that his daughter got in a fight with… other kids on the bus saying his daughter hit the girl first… that little girl about to be short a father.. pic.twitter.com/2Akd8vLw6W