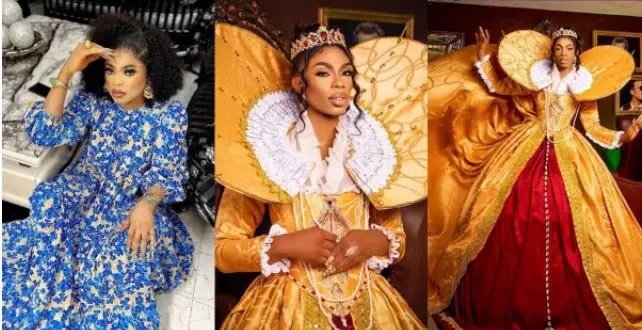 Crossdresser, James Brown is not happy with his colleague, Bobrisky for mocking his dress to the Africa Magic Viewers’ Choice Awards (AMVCA).

According to Brown, he’s not responsible for AMVCA not inviting Bobrisky whose real name is Okuneye Idris Olarenwaju the event.

Bobrisky while reacting to James Brown’s outfit took to his Instagram account to state that he saw someone’s dress which had got him laughing.

The crossdresser further stated that it isn’t a must the unnamed individual attends the event and should have sat at home.

Nigerians in their reaction to Bobrisky’s post concluded that he was referring to James Brown.

He wrote, “I see one person dress tonight laugh wan finish me. No be force. Sit down for house.”

“I didn’t cause your problem not getting AMVCA Entrance ticket because my uniqueness is natural from heaven and not fake like some people that talk anyhow in Lagos while I rule UK and the Nation. Note: I’m not competing with you Aunty yiiii”.