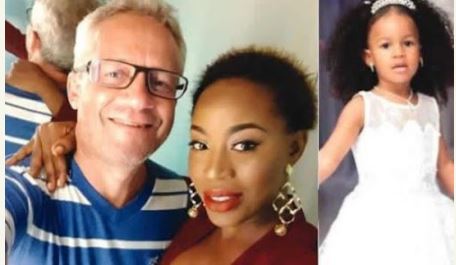 Peter Nielsen, Zaynab and her daughter
Forensic examinations of evidence from the Banana Island, Ikoyi, Lagos home of Peter Nielsen, 53, alleged to have killed his wife and daughter indicated traces of blood stains cleverly wiped, the police said yesterday.
Although initial reports suggested that the woman, Zaynab, was strangled and her three-year-old daughter, Patra suffocated, autopsy report conducted showed that Zaynab suffered trauma because of impact on her head.
Police Commissioner Imohimi Edgal yesterday suggested that there were attempts by the suspect to cover up his crime, which forensic experts traced with the use of special chemical reagents.
Edgal said: “The autopsy revealed that Mrs Zaynab Nielsen suffered trauma as a result of the impact on her head. Secondly, forensic experts revealed that there were blood stains from the couple’s bedroom to the kitchen.
“Though it was cleverly wiped from the floor, the experts were still able to detect it with the application of special chemical reagents. In addition, blood stains were also discovered on the wash hand basins and on the hand towel the suspect used in wiping his hands after the commission of the offence. Although it was cleverly cleaned up as well, the experts were able to discover that too.”
Edgal said the Danish Embassy was co-operating with the police, adding that the embassy provided legal representation for the suspect.
He said: “I spoke personally with the ambassador apart from the official correspondence. They also arranged for counsel for their citizen so they are following the process very closely. We did not parade the suspect for obvious reasons. Do not forget he’s not a Nigerian and so, there are diplomatic connotations.
“This is a man being accused of first degree murder. So, it would have been wrong for the police who are going to prosecute him, to also begin to parade him before such prosecution. However, he was charged to an open court. We are concerned with ensuring that he is diligently prosecuted and justice is done.”
--Advertisements--