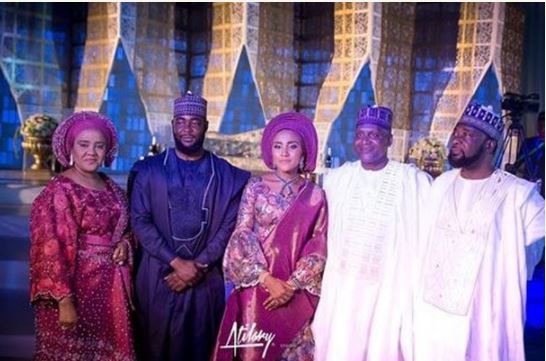 The Dangote family at the wedding ceremony
Alhaji Aliko Dangote and his ex wife were said to have married in 1977 when he was 20 years old.
But then, she was chosen for him and the pretty woman gave birth to his daughters—Mariya, Fatima and Halima.
The Forbes-listed billionaire, Aliko Dangote has been married four times, and his first three marriages ended in divorce. He is said to have a total of 15 children from these marriages.
Now divorced, Dangote and his former wife met again last Saturday in Kaduna at the Mothers’ Night organized as part of the activities for Fatima Dangote’s wedding to Jamil Abubakar.
Present were the bride’s parents and friends of the family. Jamil, the groom, is a pilot and son of former Inspector-General of Police, MD Abubakar.
Sources close to the families revealed that the couple’s families are planning to spare no expense in giving them the treat of a grand wedding celebration.
Trust Aliko, about five presidents in the world and all the past presidents of Nigeria are billed to attend his daughter’s wedding which comes up later in the month at the prestigious Eko tuneel, Lagos.
Unlike the wedding of Dangote’s first daughter, Halima to Bello in Kano city few years ago, Fatima’s forthcoming wedding promises to be star-studded.
--Advertisements--