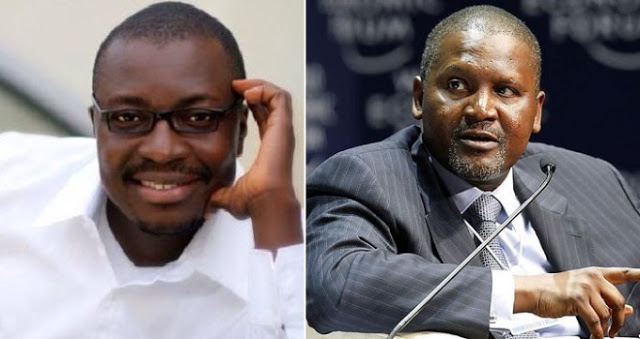 Nigerian business magnate, Aliko Dangote who gave out one of his daughters’ hand in marriage some days ago, has reportedly given ace Nigerian comedian, Ali Baba N25million to distribute to young Nigerians interested in business.
--Advertisements--

According to the comedian who shared a ptuneo of Africa’s Richest man, they had known each other for 23 years now, revealing were they met and all…

He also stated that only those who need the money should apply.

“I have known Aliko Dangote for nearly 23 years now. Met him the first time in the company of the owner of Harka Airline… years ago. And 5 years after that meeting we became friends.

So when I told him I wanted to give out some cash to people who want to do better business, he gave me N25m to distribute this week on Instagram. Only those who need it need to apply.

No DMs please. Because in truth… you need to count the number of comments on the Steve Rhodes post (at about 1am today) to know what our problems are… YOU WILL WRITE ABOUT LESSONS THAT PEOPLE NEED TO GET BETTER.

NO ONE WILL CARE. THEY WILL NOT EVEN SHARE TO THEIR FRIENDS. BUT A HALF POST THAT SAYS YOU WANT TO DASH MONEY… THEY WILL JUMP AT IT. DANGOTE BUILT A FACULTY OF BUSINESS STUDIES…

BUILT HOSPITALS. NOT HIGHLIGHTED BUT THE HINT OF HIM DASHING MONEY… ALL DRY BONES ROSE. WE NEED TO WAKE UP”