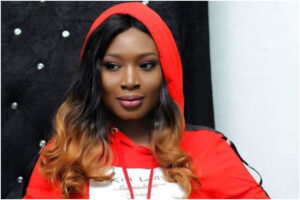 Nollywood actress M.O Bimpe has come out to clear the air on the sex for roles allegations between herself and movie producer Yomi Fabiyi.

Nigerian actor and movie producer Yomi Fabiyi has been making headlines for a few days after the issue between himself and his baby mama escalated.

During the banter between Yomi and his baby Mama Grace, there were allegations of the actor being an abuser. Some of his students also came out to expose him revealing how the actor has been demanding sex for roles in his movies and production.

Blogger Gistlover also shared screenshots of some of the students who accused the actor Yomi of extortion of money for roles they never got.

In a new development, M.O Bimpe has come out to clear the air on the sex for roles between herself and Yomi through interaction with her fans on her Instagram stories.

According to the actress, Yomi did not ask her out until they were done shooting for a movie Yomi featured her on. 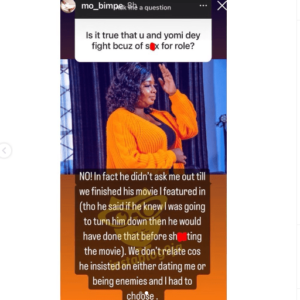