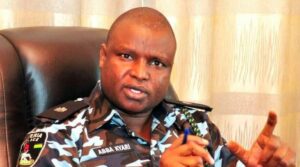 The trial of the suspended Deputy Commissioner of Police, DCP, Abba Kyari, has continued.

According to a report by Vanguard, the Federal High Court sitting in Abuja, on Wednesday, admitted in evidence, the sum of $61, 400, which Abba Kyari, who is facing drug trafficking charge, allegedly offered to the National Drug Law Enforcement Agency, NDLEA, as bribe.

Trial Justice Emeka Nwite admitted the money as an exhibit, after the NDLEA tendered it in evidence through its third witness in the case, PW-3, Mr. Peter Joshua, who identified himself as a Chief Superintendent of Narcotics and an exhibit officer attached to the FCT Command of the agency.

The witness told the court that the foreign currency was handed over to him on January 25, after he weighed and conducted preliminary test on wraps of cocaine that were seized from two convicted drug pushers- Chibunna Patrick Umeibe and Emeka Alphonsus Ezenwane- who were linked to Kyari.

He said the money, all in $100 bills, were given to him for safekeeping by the Director of Intelligence and Deputy Commander-General of Narcotics, at the office of the Commander, NDLEA FCT Command.