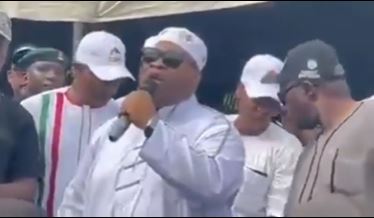 Osun State governorship hopeful, Senator Ademola Adeleke, during his campaign told the crowd that he has come with lots of money to give to voters so they can elect him in the forthcoming elections.

The Senator who represented the Osun-west senatorial district between 2017 and 2019, is contesting for the governorship position under the umbrella of the People’s Democratic Party (PDP).

Speaking during a campaign, Adeleke told voters that he arrived with money for them.

“If it’s about money, I have come with money,” Senator Adeleke says in Yoruba while patting his pocket.

He tells them he isn’t there with only Naira but also with Dollars, Pounds and Euros.

“Fire for fire,” he adds as his audience hail him.