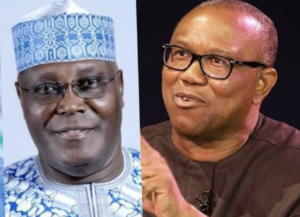 Atiku is the Presidential candidate of the Peoples Democratic Party while Obi is contesting for the position of President under Labour Party.

Atiku, who featured on Arise TV Friday, claimed he was not aware of the departure of his former running until three days after he declared for Labour Party.

“I didn’t know Peter Obi left PDP. He informed me three days later he declared for Labour Party. So he didn’t even consult me,” he said.

On Labour Party chances in 2023, he said; “It will take a miracle for Labour Party with no structure in the grassroots to win the presidency.

Earlier, the PDP Presidential candidate described the Muslim-Muslim ticket by the ruling All Progressive Congress (APC), as “unwelcoming and unripe for Nigeria as a democratic state”.

He also vowed to defeat the APC flag-bearer Bola Tinubu come 2023 while kicking against the idea of the emergence of Karim Shettima reducing his chances in the North East.