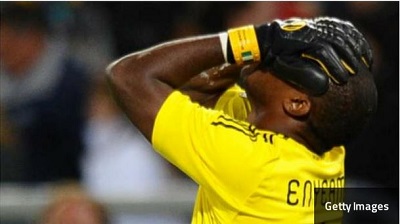 Vincent Enyeama
Super Eagles coach, Gernot Rohr, has declared that Lille of France goalkeeper, Vincent Enyeama, will not be part of his squad for the 2018 World Cup in Russia.
The Franco-German said it was practically impossible to consider Enyeama for the tournament. Rohr said the former national team goalie was struggling with his form.
Enyeama resigned from his international career in October 2015 following a row with former Nigeria coach Sunday Oliseh. With Rohr in charge, rumours have been flying about that the former Enyimba number one keeper could return to the team.
Rohr told Soccer Laduma, “He has problems in Lille at his club.
“He is currently not playing and is only the number three at his side.
”He wanted to switch clubs but he didn’t find a new team.
”As a consequence, the question about Enyeama returning is not really up for debate.”
--Advertisements--