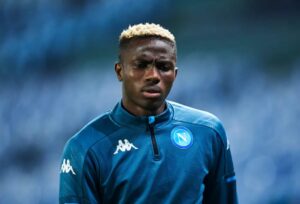 Super Eagles striker Victor Osimhen was in the news for the wrong reasons on Sunday afternoon following an altercation in training with Italian club side Napoli.

Luciano Spalletti’s side are two days into their camp in Castel di Sangro, and were going through an open 11v11 training exercise when new signing Leo Ostigard, who was selected in Osimhen’s team, was the subject of a robust challenge by Cameroon international Andre-Frank Zambo Anguissa.

The Nigeria international’s appeals for a foul call fell on deaf ears, leading him to remonstrate in an aggressive fashion. Despite attempts by Anguissa to placate him, Osimhen would not be mollified.

This led Spalletti, who was refereeing the session, to kick the 23-year-old off the training pitch himself. Per reports from multiple sources, the Napoli boss was believed to have told Osimhen, “You talk too much. Go and take a shower.”

This decision did not sit well with the striker, who ripped off his bib and tossed it at the kitman, before storming into the dressing room in a huff.

While he is combustible most of the time, Osimhen’s temperament has come under increased scrutiny recently, as only last week he was involved in a heated argument with teammate Hirving Lozano during a friendly with Perugia.

Luciano Spalletti: “(Osimhen) has to be careful of his emotional reactions. He is a strong attacker and he will always have his hands on the defenders. He must be careful. The referee was correct; when I went to talk to him, he explained what he saw.”

The Napoli faithful will hope this altercation is nothing serious, as following the departures of the likes of Kalidou Koulibaly, Lorenzo Insigne and Dries Mertens, the club’s ambitions for the coming Serie A season rest heavily on their no.9.

There have been reports of interest in Osimhen from across Europe, with Bayern Munich frequently linked in particular, but as yet no official bids have been made.