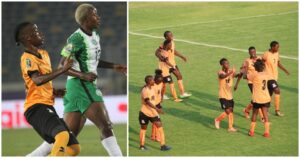 Super Falcons of Nigeria missed out on bronze after they were beaten 1-0 by Zambia in the third place match of the Africa Women’s Cup of Nations (AWCON) holding in Morocco.

An own goal by Chiamaka Nnadozie in the 29th minute of the game played in Casablanca, was enough to hand the She-polopolo the victory.

Zambia, who were beaten by South Africa in the semifinal, have now clinched the third spot in the continental women’s flagship tournament.

Nigeria were gunning for a record-extending 10th title but got defeated by hosts Morocco in the last four on penalties.

The Randy Waldrum ladies could have taken the bronze medal as a consolation but had a poor outing against Zambia, finishing fourth for the very first time in the history of the competition.

The final will be played by Morocco and last edition’s finalists, the Banyana Banyana of South Africa, on Saturday at the Moulay Abdellah Sports Complex in Rabat, Morocco.