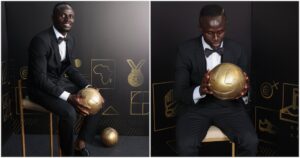 Sadio Mane has been crowned the 2022 Africa Player of the Year at the CAF football awards held in Rabat, Morocco on Thursday evening.

The 2021 Africa Cup of Nations winner was presented with the award at a colourful ceremony in Rabat.

The new Bayern Munich forward had a successful campaign last season, helping Liverpool win the a domestic double of FA Cup and the Carabao Cup.

He was also a part of the Liverpool team that reached the final of the UEFA Champions League last season.

Internationally, he played a key role as Senegal won the Africa Cup of Nations for the first time in their history.

The Teranga Lions also beat Egypt to qualify for the World Cup.