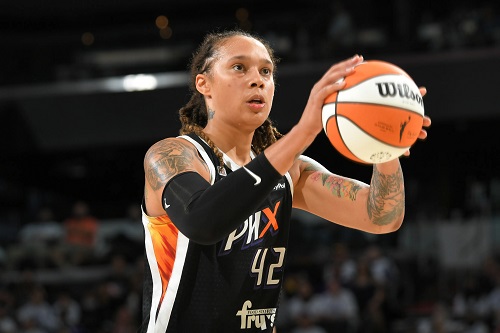 A court in Russia has sent a popular US basketball star, Brittney Griner to jail. This comes after she was foung guilty of drug smuggling.

Griner was sentenced to nine years in prison in a ruling US President Joe Biden called “unacceptable”.

The court “found the defendant guilty” of smuggling and possessing “a significant amount of narcotics”, Judge Anna Sotnikova told a court in the town of Khimki just outside Moscow. The player was also fined one million rubles ($16,300).

Griner, a two-time Olympic gold medallist and Women’s National Basketball Association (WNBA) star, was escorted out of the courtroom in handcuffs by police after the verdict, turning to reporters and saying: “I love my family”.

Biden condemned the verdict and reiterated calls for the 31-year-old’s release.

“My administration will continue to work tirelessly and pursue every possible avenue to bring Brittney and Paul Whelan home safely as soon as possible,” he said, referring to another American imprisoned in Russia on an espionage conviction.

The US has proposed a US-Russia prisoner swap that would include the athlete and Viktor Bout, an imprisoned Russian who was once a prolific arms dealer.

Griner was arrested at Moscow’s Sheremetyevo airport on February 17 when she entered the country with vape canisters containing cannabis oil.

Sotnikova said on Thursday that Griner committed the crime “deliberately” although Griner had testified during the trial it was a mistake.

On Thursday, speaking to the court ahead of sentencing, the player said it was an “honest mistake”.