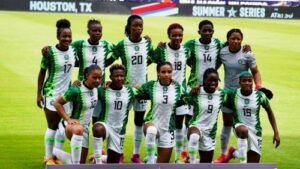 Nigeria’s national female football team, Super Falcons players, have reportedly boycotted training on due to unpaid bonuses ahead of their #WAFCON2022 third-place match against the Copper Queens of Zambia in Morocco.

The Special Adviser to the President on Media and Publicity, Femi Adesina, had stated this in a release, titled “Thanks for the gallant display, President Buhari to Super Falcons.”

According to Adesina, President Buhari is encouraged by the doggedness, resilience and professionalism of the girls, who despite playing with two players down before a home crowd showed their quality and class.

It was gathered on Wednesday that “the female national team players failed to show up for their training to protest the non-payment of some of their entitlements.”

Some of the players also confirmed that they had not received any match bonuses since the African Women’s Cup of Nations qualification matches.

“We’ve not been paid for the last WAFCON qualifiers.” One of the players said to sports journalist, Ojora Babatunde, on Tuesday.

All efforts to get the reaction of the Nigerian Football Federation president, Amaju Pinnick on this claim were unsuccessful as of the time of filing this report.

He failed to respond to several calls and messages sent to him as of press time.