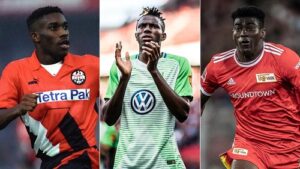 This he achieved after dazzling the German Bundesliga, ending the just concluded 2021/2022 campaign with 15 goals.

Interestingly, Awoniyi is not the only Nigerian who graced the Bundesliga, highlighting a breed of fine exports from the West African country. This piece features the best Nigerian footballers that the Bundesliga has been honored to employ.

Jay Jay Okocha was the first Nigerian to grace the Bundesliga. Prior to his arrival to the Bundesliga, he had already played for a third division Bundesliga side, Borussia Neunkirchen, and then a very brief stint with the second division side, FC Saarbrücken.

However, it was with Eintracht Frankfurt in the Bundesliga that the attacking midfielder shot to fame.

Jay Jay’s best moment in the Bundesliga is a never-to-be-forgotten moment in an August 1993 match against Karlsruhe. The Nigerian came up against legendary goalkeeper Oliver Kahn and three other defenders after receiving the ball at the goal mouth.

Okocha danced with the ball in front of the players, feinting and twirling as he sought a space to shoot. A few minutes later, he was done, leaving Khan lying down on the turf looking defeated and the stadium roaring in ecstasy. That wonderful goal was voted the goal of the season.

Jay Jay scored 18 goals and 13 assists for Die Adler, with most of his goals coming from free-kicks, a prowess he had become epitomized with.

He finally left the club after the 1995/1996 season, going on to feature for several other clubs like Fenerbahce and PSG.

The now 48-year-old Nigerian ended his club career in 2007 at Hull City but is still revered for his vastly entertaining playing style during his playing days.

Sunday Oliseh’s adventure in Germany began with FC Koln in the 1995/1996 season. He featured two-dozen times for the Billy Goats that season, helping them to 12th place on the table.

After an Olympic gold outing with his Nigerian side in the 1996 Olympics, Oliseh became a regular for his club with four goals and impressive displays as a defensive midfielder. This attracted interest from top European clubs, enabling a move to Ajax in 1997.

He moved on from Ajax to Juventus in 1999, spending one season with The Old Lady before a move back to the Bundesliga materialized as Borussia Dortmund came knocking. He played there in Germany till 2004, ending his adventure with a loan stint at VFL Bochum.

Sunday Oliseh retired from club playing duties in 2006 but is now fully immersed in managerial duties. He previously managed Dutch club Fortuna Sittard, coaching them to within reach of Eresdivisie’s promotion from the Eerste Divisie before parting ways with the club. Currently, he is the head coach of SV 19 Straelen, coaching them to the Lower Rhine Cup glory.

The lanky Nigerian forward is currently a top star in the football world. Though his glory days did not come in the Bundesliga, it certainly set the foundation for him to thrive.

Osimhen signed for Wolfsburg in 2017, two years after winning the golden boot award with his Nigerian side in the 2015 U17 world cup. He made 14 appearances for the team before getting loaned out. He used his time at Wolfsburg to adapt to life outside of his homeland.

Since then, he has completely developed into a lethal striker with his blistering pace and incredible physicality.

Currently, he holds the African transfer record for £80 million and will surely be thankful to the Bundesliga for allowing him to start.

After leaving Nigeria at the age of 16 for Italy, Martins started his senior career with Inter Milan in 2002 then moved to Newcastle United in 2006 before arriving at VFL Wolfsburg in 2009 for £19 million.

During his debut Bundesliga game, Martins scored a sublime goal for his side; he dribbled past two defenders and then calmly slotted the ball past the goalkeeper, dazzling the stadium.

Aside from his Bundesliga debut goal, Obafemi Martins is also remembered for his backflips goal celebrations. Though his time in the Bundesliga was short-lived he scored six goals in sixteen appearances for Wolfsburg.

Obafemi went on to feature for six more clubs after departing Germany and is currently retired from playing football after last playing for Chinese club Wuhan Zall.

Taiwo Awoniyi’s fine display in the 2013 U-17 world cup saw him get snapped up by Liverpool FC. However, he was loaned out to several clubs to develop. One of such loans saw him land in Mainz, signaling his arrival at the Bundesliga.

His first season in the Bundesliga was underwhelming, scoring just one goal in sixteen games for Mainz and he got loaned out again to Union Berlin.

With Union, he began to show glimpses of his quality, this time scoring five goals in twenty-one games. Thanks to this obvious resurgence, the club decided to buy him permanently.

Taiwo became a permanent Union Berlin player for £6.5 million and rewarded the club for the faith they put in him. He hit his first double-digit goal tally of his professional career and scored the winning goal in a 3-2 win over Bochum that sealed their qualification for the Europa League next season.

Having already put his name on the lips of every Union Berlin fan in just two seasons, Taiwo has moved to the premier league seeking a new challenge. With age on his side at 24, he is sure to steal the news headlines for good in the years to come.

We are sure that the future still holds more of this kind for the league.