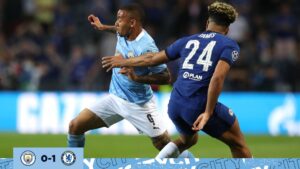 Tuchel also makes two changes to his team after their loss to Villa last Sunday. Havertz and Kante, who is back after a hamstring injury, are brought in. Mendy is also fit to start after being forced off at half-time in that game with a rib injury.

Kovacic and Pulisic start on the bench.
Pep Guardiola makes two changes to the side that beat Everton last time out. Gundogan starts despite limping out of training yesterday, with Bernardo Silva also coming in. Fernandinho and Jesus drop to the bench.

City comfortably saw off Paris Saint-Germain 4-1 on aggregate in their semi-final and are looking to add to their EFL Cup and Premier League trophies this season with their first-ever Champions League title.

They’ve lost two of their five games since their last outing in the competition (W3), with one of those defeats coming against Chelsea. Thomas Tuchel’s side are looking to pick up their first silverware under the manager after beating Real Madrid 3-1 on aggregate last time out. They’ve lost three of their five since then though (W2), including their last match against Aston Villa and the FA Cup final.