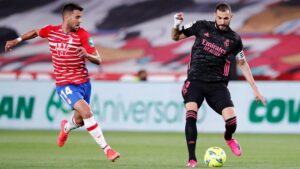 After Atletico Madrid’s win yesterday, Madrid know they need to match that today to keep up the pressure in the title race. They’re unbeaten in their last 15 LaLiga games (W10 D5), a run that goes back to the start of February, but they’ve drawn three of their previous five.

They face a Granada side that have lost their last two outings, but before that, Diego Martinez’s side came out on top against Barcelona with a 2-1 victory.

Zinedine Zidane makes three changes to his side after the draw with Sevilla last time out as he brings in Gutierrez, Park and Rodrygo. Kroos and Odriozola start on the bench and Marcelo is left out of the matchday squad.

Martinez makes four changes to the team that lost to Real Betis at the weekend. Silva is in goal, with Eteki, Vico and Molina also coming into the starting line-up. Escandell and Suarez drop to the bench, while Angel Montoro and Yangel Herrera miss out through injury.