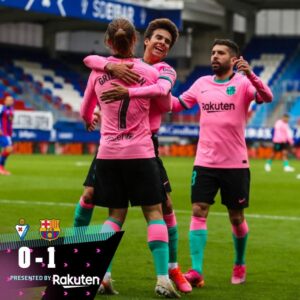 Ronald Koeman also makes six changes to Barcelona, who are without captain Lionel Messi, who is being rested. Neto, Dest, Mingueza, Firpo, De Jong and Trincao are the players brought in.

Pique and Alba start on the bench, Clement Lenglet is suspended, while Marc-Andre ter Stegen is unavailable after having knee surgery.

A three-match winless run meant that Barcelona’s title chase came to an end last time out after they were beaten 2-1 by Celta Vigo. A Champions League spot is already secured for next season, but they’ll want to try and finish on a high.

As for Eibar, their relegation was confirmed after a 4-1 loss to Valencia last Sunday, but they were unbeaten in their three games before that, winning two and drawing one.