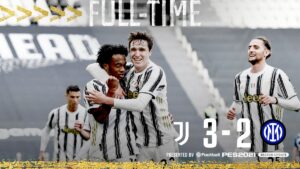 Inter make six alterations from their 3-1 demolition of Roma, as Conte puts out a team that more closely resembles their first-choice XI.

Handanovic returns between the posts sending Radu to the bench, while De Vrij and Bastoni replace Ranocchia and D’Ambrosio in defence. Hakimi gets the nod at wing-back ahead of Perisic, while Eriksen is preferred to Vecino in midfield. The final switch is in attack, where an injury to Alexis Sanchez means Martinez partners Lukaku.

Juventus make four changes from their 3-1 victory over Sassuolo in midweek. Buffon is dropped in favour of Szczesny, while one veteran centre-back replaces another as Chiellini enters the XI for Bonucci.

Bentancur is back in midfield sending Arthur to the bench, while Cuadrado takes a place on the right wing, pushing Kulusevski into a striker role instead of Dybala.