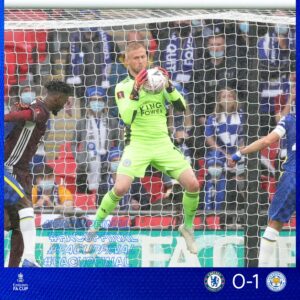 This is the 140th FA Cup final with Chelsea and Leicester becoming the 117th different pairing in the competition’s showcase match. Chelsea know what it takes to win this competition.

For Leicester, this match is uncharted territory. This is the Foxes’ first FA Cup final since 1969 and their first domestic final since 2000 when some of their players weren’t even born.

Chelsea are surely favourites to win this game due to their experience at this level. After all, they’ve reached a major domestic or European final in the last five consecutive seasons now.

However, they’ve been more brittle at Wembley in recent years, losing four of their last seven trips here. Can Leicester make it fifth time lucky and lift the FA Cup for the very first time?

The 20,000 fans lucky enough to be at Wembley cheer the players out onto the pitch where they’re greeted by Prince William. As the administrative home team, Chelsea will play wearing their usual royal blue. Leicester will play in their maroon third kit. Becky Hill sings a stirring rendition of God Save The Queen. We’re nearly ready for kick-off!