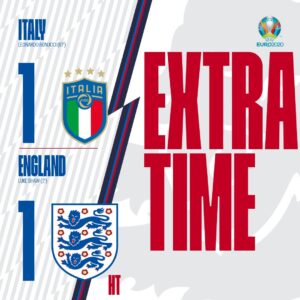 It’s England first-ever appearance at the final of the European Championships and their first final at a major tournament since winning the 1966 World Cup. It took extra time to see off Denmark, with a goal from Harry Kane sealing a 2-1 win to get them through.

As for Italy, they were taken to penalties by Spain after a 1-1 draw at the end of extra time and Jorginho netted the decisive penalty to win the shootout 4-2. They’re now unbeaten in their last 33 games in all competitions, a run that started all the way back in October 2018.

Just one change from Gareth Southgate to the team that started against Denmark. England revert to a back three, with Trippier coming in at right wing-back. Saka starts on the bench.

Roberto Mancini was clearly pleased with his side’s performance against Spain as he names an unchanged team to the one that started on Tuesday.