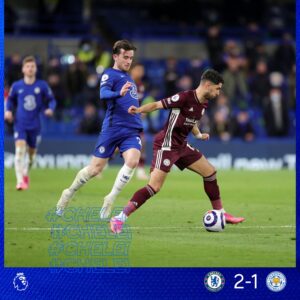 Leicester have already beaten Chelsea twice this season, beating them 2-0 in the reverse fixture back in January before last weekend’s cup victory. A first league double over Chelsea since 2000-01 would be very welcome for them.

Chelsea boss Thomas Tuchel makes three changes to the side that lost 1-0 at Wembley three days ago. Mendy returns in goal while Chilwell and Pulisic replace Alonso and Ziyech.

Brendan Rodgers makes two changes to Leicester’s 11 from that game. Albrighton replaces the injured Evans while Maddison starts ahead of Iheanacho.

A win for Chelsea here would allow them to leapfrog Leicester into third place and give the Blues a cushion on the final day. Victory for Leicester, meanwhile, would ensure a top-four finish for the Foxes for only the second time in the Premier League era.

With a resurgent Liverpool coming up behind, this is a game that neither side can afford to lose.