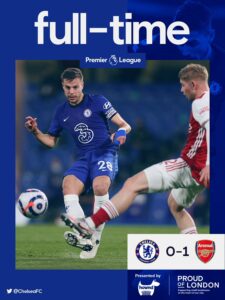 Chelsea are looking to tighten their grip on a place in the top four as they head into their final three games of the season and a win today would lift back above Leicester City into third. They’re unbeaten in their last seven in all competitions (W5 D2), winning the previous three on the bounce.

As for Arsenal, they’ve won just two of their last six in all competitions, but are in good form on the road in the league, going unbeaten in their last five away from home (W3 D2).

Mikel Arteta makes five changes to his team after their win over West Brom last time out with Mari, Tierney, Partey, Odegaard and Aubameyang all coming in. Chambers, Ceballos, Willian, Pepe and Martinelli start on the bench.

Thomas Tuchel makes seven changes to the side that beat Manchester City on Saturday as he brings in Kepa, Silva, Zouma, Jorginho, Chilwell, Mount and Havertz. Alonso, Werner, Mendy and Ziyech all drop to the bench.